Wan Jinjun, a 62-year-old retiree who has swum the Yangtze River almost every day for the past decade in Wuhan, said he’s never seen a drought like this before.
An extreme summer has taken a toll on Asia’s longest river, which flows about 3,900 miles (6,300 kilometers) through China and feeds farms that provide much of the country’s food and massive hydroelectric stations, including the Three Gorges Dam — the world’s biggest power plant. A year ago, water lapped almost as high as the riverbank where Wan swims. Now, the level is at the lowest for this time of year since records began in 1865, exposing swathes of sand, rock and oozing brown mud that reeks of rotting fish.
“And it keeps going down,” said Wan, who last week needed to descend almost 100 steps — usually hidden beneath the water-line — to cool off on a sweltering 40-degree-Celsius (104 degrees Fahrenheit) day.
Yangtze’s retreating water levels have snarled electricity generation at many key hydropower plants, sparking energy chaos across parts of the country. Mega cities including Shanghai are turning off lights, escalators and cutting back on air conditioning. Tesla Inc. has warned of disruptions in the supply chain for its Shanghai plant, and others such as Toyota Motor Corp. and Contemporary Amperex Technology Co., the world’s top maker of batteries for electric vehicles, have shuttered factories.
With climate change likely to deliver more frequent and persistent heat waves and droughts, the current outages raise longer-term questions about China’s reliance on hydropower, the country’s largest source of clean energy that accounted for about 18% power generation in 2020, according to BloombergNEF.
Though the energy crunch is far less severe than in 2021 — when a coal shortage led to nationwide power cuts — it’s adding to challenges authorities are facing in reviving an economy already battered by frequent Covid lockdowns and a property crisis. And the timing couldn’t be more awkward, coming months before President Xi Jinping is set to seek a precedent-breaking third term. It is also an embarrassment to China’s top officials, including Xi and Premier Li Keqiang, who’d earlier vowed to prevent such repeats.
The southwestern province of Sichuan, enduring the region’s worst drought since the 1960s, is by far the hardest hit given its high dependence on hydropower. While dam generation plunged by half in the region, a grueling heatwave has sent electricity demand surging by about a quarter. That’s added pressure on an energy network that serves a population about the size of Germany and supplies to industrial hubs that are home to factories of suppliers to Tesla.
The country also has the world’s largest fleet of solar panels and wind turbines, and is super-charging investment in renewables as it tries to reduce reliance on imported fuel. Chinese firms invested $98 billion in clean energy in the first half of 2022, more than double the amount in the same period in 2021. 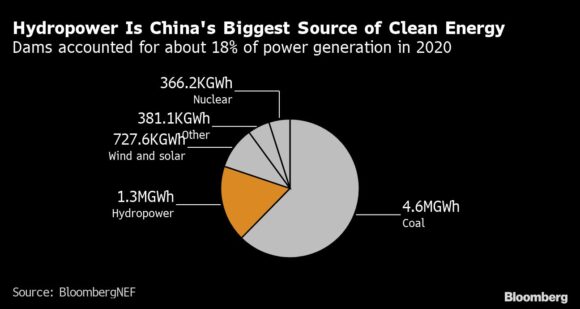 Sichuan’s power shortage shows that hydropower, usually seen as the most stable renewable source, is still not as reliable as coal, according to Hanyang Wei, an analyst with BloombergNEF. That raises doubt about how smoothly China can shift away from its reliance on fossil fuels, given that wind and solar are even less stable, said Wei.
Following last year’s crisis, which triggered widespread electricity curbs to factories throughout the country, China started to plan more coal power. Under heavy government pressure, coal mines have boosted output by 11% this year.
Li Shuo, an analyst with Greenpeace East Asia, said the situation in Sichuan is reminiscent of power outages in Hunan province in late 2020, when severe cold weather reduced wind generation and sent power demand soaring for heating. The government responded with a slew of coal-power plant approvals in Hunan, Greenpeace found in a report published last month.
“I hope the answer they draw from this is not more coal power plants, but I fear that might be where they are headed,” Li said.
Sufficient coal stockpiles have kept the crisis from spreading to other parts of China, but it’s been of little help to Sichuan, where hydropower makes up more than three-quarters of generating capacity.
China’s biggest power crunch since last fall has led to suspension of power supply to many industrial customers through Aug. 25. Companies including Toyota and CATL have already closed plants in the region for several days. Top polysilicon maker Tongwei Co. said its plant has been affected, further tightening the market for the material key to building solar panels.
Some of the impact was felt in places outside Sichuan as well. The Bund waterfront in Shanghai turned off outdoor lighting, and Wuhan in central Hubei province halted its famous Yangtze river light show.
The current situation is expected to be less painful than last year as the strictest measures have largely been limited to Sichuan, which comprises just 5% of the country’s GDP. Still, it could pose a risk to the sputtering $18 trillion economy. Economists are already downgrading the nation’s growth outlook for this year to less than 4%, well below the government’s 5.5% target.
China isn’t alone in dealing with extreme heat this summer. High temperatures in Europe have contributed to the drying of the Rhine River, with levels at a key chokepoint falling as low as 30 centimeters, affecting navigability on the waterway. Droughts in India have caused rice planting areas to shrink by 13% so far this year, threatening global food supply.
In Wuhan, the city where the coronavirus first emerged in late 2019, temperatures have routinely topped 40 degrees Celsius this summer. On a recent weekday, Luo Yi, a 26-year-old worker at a ferry port along the Yangtze, was trying to stay cool in the shade. His company had moved its floating port closer to the shore earlier this year to leave more room for shipping on the drought-shrunken channel.
“This is the hottest summer I can remember,” he said.
At Heartland 66, one of Wuhan’s top luxury malls with outlets including Gucci, Prada and Tiffany & Co., orders to reduce power consumption meant that shoppers had to walk down halted escalators. Air conditioners were operating at reduced rates, leaving food courts on the top floors sweltering.
The region may soon see some relief. Sichuan’s capital city Chengdu is forecast to have cooler temperatures and rainfall from Thursday, according to the China Meteorological Administration. Over the longer term, China and the rest of the world face increasing challenges from volatile weather patterns.
Near Hankou Beach on the Yangtze in Wuhan, the heat hasn’t stopped Wan and others from venturing out for a swim yet. Jiang Guangming, 65, who’s been paddling in the river since he was a teenager, crouched in the water to avoid the sun beating down on his shoulders.
“The water would reach street level in previous years,” he said ruefully, looking at the wide, dry bank across the channel. “This year even the riverbed sand is exposed.”
Top photograph: Exposed banks, due to low water levels caused by drought, along the Han River near the confluence with the Yangtze River in Wuhan. Photo credit: Bloomberg
Topics Trends China
Was this article valuable?
Thank you! Please tell us what we can do to improve this article.
Thank you! % of people found this article valuable. Please tell us what you liked about it.
Here are more articles you may enjoy.
Get automatic alerts for this topic.
Your email address will not be published. Required fields are marked *
*
*