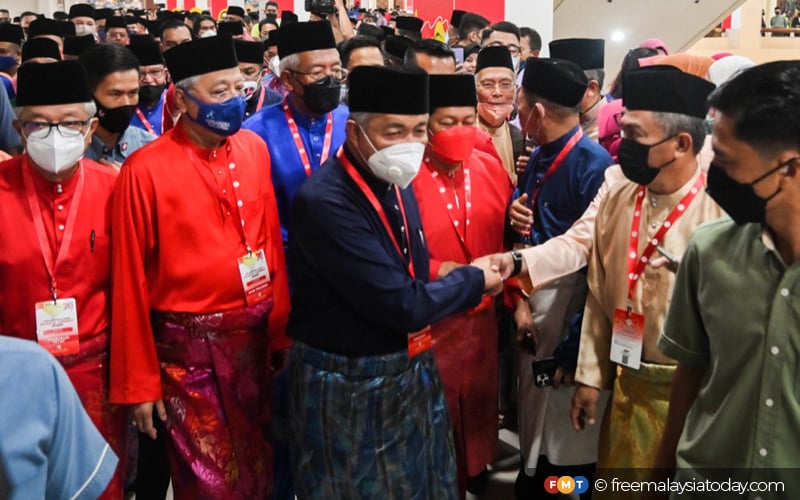 From Terence Netto
Monday appears to have been a febrile day in Umno politics.
A hurriedly called meeting of division chiefs in the morning led to an evening consultation of some party bigwigs with the Umno head of government on a matter nobody was quoted as being sure about.
The party youth chief issued a denial that the evening meeting was aimed at bringing pressure to bear on Prime Minister Ismail Sabri Yaakob to intervene in Najib Razak’s SRC apex court appeal.
No such thing, said Asyraf Wajdi Dusuki, the youth head intent on tamping down speculation that Umno was on the warpath against the country’s judiciary.
Umno’s two indictment-beset majors, president Ahmad Zahid Hamidi and immediate past president Najib, shuttled between the courts and party conclaves.
It was said Zahid did not attend the evening meeting between the prime minister and party bigwigs.
Ismail did not say what the hubbub was all about.
Media reports portrayed him as ambivalent about when to call for a general election.
To hold it this year, he said, would prioritise the rosy hues sported by a resurgent economy against worries over the rising cost of living and the blowback from the billion ringgit naval frigate scandal presently roiling the waters.
To defer it to next year runs the risk of coping with the adverse effects of probable recessions in China, Malaysia’s biggest trading partner, and in the US, our largest investor.
To call for polls or not to call, is the prime minister’s Hamlet-like predicament.
Ismail is in the position of Atal Bihari Vajpayee, India’s prime minister in early 2004 when his party, BJP, holder of federal power, was riding high in the polls following an unprecedented 8% growth in the economy and détente between India and Pakistan.
Vajpayee, at the height of his popularity, was reluctant to go for polls, wanting to hold out for some more time.
However, party bigwigs, ecstatic over the growth rate and buoyed by BJP’s “India Shining” slogan, pushed for an election.
Vajpayee yielded. In the event, the BJP-led coalition crashed to defeat to a Congress Party-cobbled opposition alliance.
It was a startling reversal of fortunes, against all that the pundits and polls had predicted.
In straits like this, it is useful to keep in mind the station master who, when asked when the train would arrive, replied: “That depends.”
Pressed again, “On what does it depend?” he nonchalantly answered: “That, also, depends.”
A certain opacity about the subject and tenor of Umno’s Monday morning and evening meetings and the identity of its participants lent credence to the view that the whole thing was an organised bedlam.
Seen from the outside – and bearing in mind that Umno is beset with factions – it looked like the party was a functioning anarchy.
Come to think of it, that is not a bad thing now that it is the common presumption that the Malay vote has swung back to Umno, after the slight setback that vote bank dealt the biggest party in the country at GE14 in May 2018.
The experience of 22 months out in the opposition, followed by 17 months in a subsidiary position in federal governance, segueing into a 12-month span as primary federal governor, could have taught the party that an imperial Umno prime minister-ship is no longer tenable.
If true, this would be a big gain for the maturation of the Malaysian polity.
An Umno newly awakened to the limits and frailty of its leadership would be less inclined to the hubris that has fomented the widespread corruption and abuse of power of recent decades.

Terence Netto is a senior journalist and an FMT reader.
The views expressed are those of the writer and do not necessarily reflect those of FMT.
The partnership will see local entrepreneurs benefit from expert advertising solutions and a database of 15.8 million potential customers.
Tune Protect’s tagline ‘Insurance Simplified’ offers a variety of products to suit the growing needs of Malaysians today.
It is advisable that those 45 years old and above arrange for a colonoscopy every five years to ensure a healthy bowel.
Grab Malaysia’s #TechuntukSemua initiative integrates the PWD community within the workforce so they can become financially mobile.
Low-density properties are rising in popularity because it gives residents more space, security and privacy.