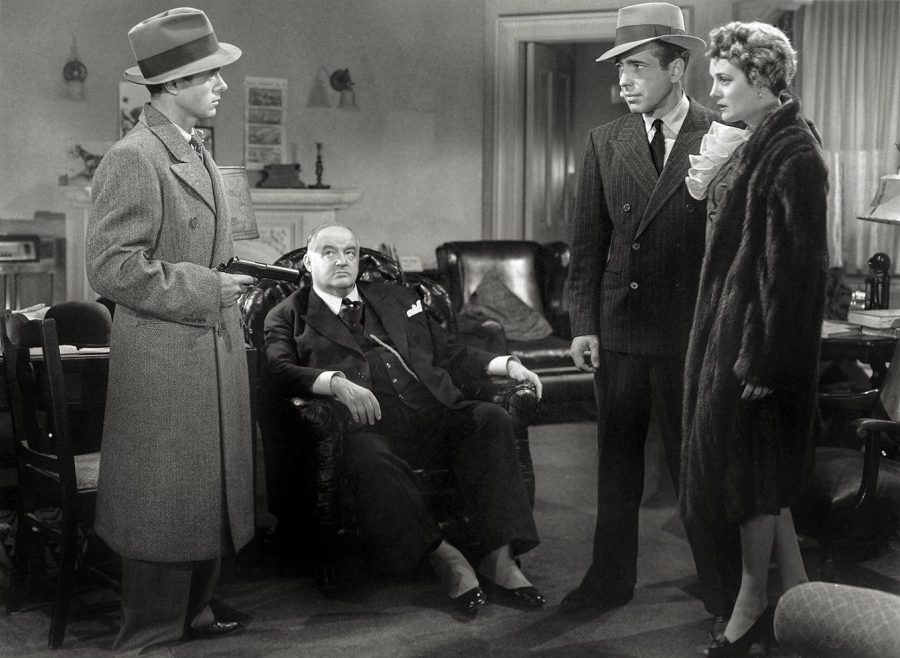 SCHROON LAKE, NY — You’ve seen him on Turner Classic Movies (TCM) as a guest host commenting on a wide range of films—from Oscar-laden jewels of the silver screen to more obscure gems once considered “B-movies.” Now you can see him at the Adirondack North Country’s beloved Art-Deco movie house, the Strand Theater in beautiful Schroon Lake, introducing one of Hollywood’s all-time great movies and the film that helped launched the film noir rage of the 1940s and 50s—“The Maltese Falcon.”

Film historian Jeremy Arnold’s latest book—his third for TCM—is “The Essentials Vol 2: 52 More Must-See Movies and Why They Matter,” which features “The Maltese Falcon.” On Monday, August 29, at 8 p.m., Mr. Arnold will introduce the movie, which stars the incomparable Humphrey Bogart as the ultimate private eye, Sam Spade, and then sign purchased copies of his book immediately following the screening.

All seats are $10 general admission, available at the door (cash only). The Strand box office is at 518-532-9077, and the theater is located at 1102 US-9/Main Street and online at facebook.com/profile.php?id=100068160832852 (or by searching Facebook for “the Strand at Schroon Lake”).
Author, film historian, and TCM commentator Jeremy Arnold. Photo provided by Larry & Liz McNamara, Owners-Operators of the Strand Theater in Schroon Lake.
In Search of the “Black Bird”
In Hollywood’s quintessential detective movie and one of the earliest examples of film noir, San Francisco private eye Sam Spade takes a case involving the search for a priceless, jewel-encrusted falcon statuette. Quickly he finds himself entangled with bizarre and unforgettable characters who will stop at nothing to acquire the “black bird” for themselves. This all-time classic launched John Huston’s directing career and transformed Humphrey Bogart into a star.

Released in 1941, “The Maltese Falcon” features an amazing ensemble of some of the film industry’s finest character actors of the era, including Peter Lorre and Sydney Greenstreet (soon to be reunited with Bogart in “Casablanca”), Elisha Cook Jr., Gladys George, Barton MacLane, Ward Bond (who was featured in multiple movies starring John Wayne), Lee Patrick, Jerome Cowan (the prosecutor in “Miracle on 34th Street”)—and in a performance that helped define the meaning of “femme fatale,” Mary Astor.

Greenstreet was nominated for the Academy Award for Best Supporting Actor—in what was his film debut. “The Maltese Falcon” also garnered Oscar nods for Best Picture and Best Writing, Screenplay, for the script by Huston, which he adapted from the novel by Dashiell Hammett.

“The Essentials Vol. 2: 52 More Must-See Movies and Why They Matter” was published in 2020 by Running Press and Turner Classic Movies. It is Arnold’s second companion book to TCM’s long-running “Essentials” program, which profiles the most vital and influential movies in film history.
Mary Astor and Humphrey Bogart in The Maltese Falcon. Photo provided by Larry & Liz McNamara, Owners-Operators of the Strand Theater in Schroon Lake.

In addition to the two Essentials books, Jeremy has written Christmas in the Movies: 30 Classics to Celebrate the Season, published in 2018 by Running Press and TCM; Lawrence of Arabia: The 50th Anniversary, published by Sony Pictures Entertainment as a Blu-ray supplement; two essays in The Call of the Heart: John M. Stahl and Hollywood Melodrama, a 2018 book tracing the career of classic director John Stahl; contributions to Jeanine Basinger’s 2003 edition of The World War II Combat Film: Anatomy of a Genre; numerous essays and liner notes for home entertainment releases; and more than 600 programming articles since 2003 for the Turner Classic Movies website. His writing has appeared in Variety, The Hollywood Reporter, Moviemaker, Premiere and DGA Magazine.

His commentating work includes stints as a guest host on TCM with Ben Mankiewicz; dozens of appearances at film festivals, museums, and repertory screenings across the United States and internationally; and fifteen audio commentaries for the Blu-ray or DVD release of classic films, including Sudden Fear (1951), Day of the Outlaw (1959), Raw Deal (1948), Ride Lonesome (1959), The Holly and the Ivy (1952) and The Lavender Hill Mob (1951).

Born in Washington, D.C., Jeremy lives in Los Angeles and is a fourth-generation summer resident of Lake Placid, where in recent years he has been a guest programmer and host at the Lake Placid Film Festival.

This project is made possible with funds from the Statewide Community Regrants program, a regrant program of the New York State Council on the Arts, with the support of the Office of the Governor and the New York State Legislature and administered by the Adirondack Lakes Center for the Arts. The SCR grant itself was made possible via fiscal sponsorship by the Schroon Lake Arts Council (schroonlakearts.com). “Classic Movie Mondays” is also supported by funding from Adirondack Film, a not-for-profit organization whose mission is “to advance the art and the appreciation of film and filmmaking in the greater Adirondack region.” Information about upcoming events and support is available at adirondackfilm.org.
Photo at top: The Maltese Falcon (1941). Directed by John Huston. Shown, in Spade’s apartment: Elisha Cook, Jr. (as Wilmer), Sydney Greenstreet (as Kaspar Gutman aka The Fat Man), Humphrey Bogart (as Sam Spade), Mary Astor (as Brigid O’Shaughnessy). Photo provided by Larry & Liz McNamara, Owners-Operators of the Strand Theater in Schroon Lake.

Community news stories come from press releases and other notices from organizations, businesses, state agencies and other groups. Submit your contributions to Almanack Editor Melissa Hart at [email protected]
Your email address will not be published. Required fields are marked *